A few weeks ago, I got an invitation to sample some tea from Sokenbicha Tea, a leading tea brand from Japan which has recently come to the US.

I’ll start off by saying that Sokenbicha’s teas are much, much better than the vast majority of teas that you can find out there on the shelves.

Because they start out unsweetened and are zero calories. They came in a variety of interesting flavors, and I have to confess that with a sudden heat wave, I immediately tore into the box and tried most of the samples before I could really photograph anything.

The five versions are:

First off, you have to really know what kind of teas that you like. Are you an iced tea fan? I am, but these teas are different from what you get at a restaurant. Restaurant teas tend to be a blend of orange pekoe standard black teas, with a few flavors (usually florals) blended in to give the tea some body and nuance.

In comparison, the Sokenbicha teas are almost a different animal.

They are crisp, flavorful, and packed with interesting aromas and taste combinations. If you tend to like your teas more flavorful or want to practice a healthy start at drinking lots of liquids, this is a great start. I liked that you can get all the benefits of water (and then some from some of the add-ins) without sacrificing the taste. I know lots of people who try to pep up their water with things like Crystal Light, but think this would be a much better alternative.

For example, here’s Sokenbicha vs Arizona Iced Tea, a common favorite. Look at all those carbs in the form of sugar! (No wonder it tastes so good.) 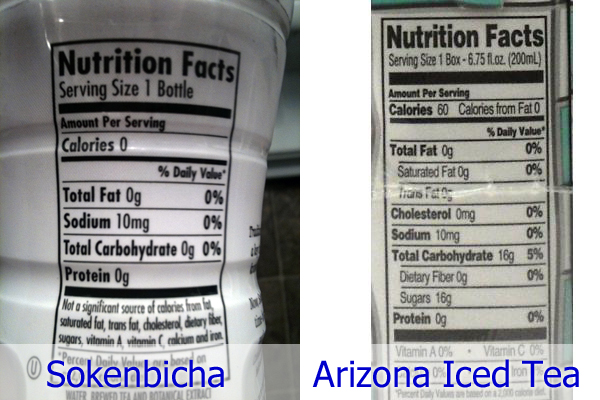 I’m really glad I got a chance to try all of the flavors. Personally, my favorite was most likely Revive or Defend, since I tend to be a fan of oolong teas. Sokenbicha does a good job of not spoiling the base flavor of the oolong and staying true to the scent. As for the rest of the tea, I think it’s a matter of preference. I think barley teas were just OK in general, but it was an interesting variation to get them iced. My least favorite tea was the Shape tea, but I think it’s because I don’t tend to favor the bold earthiness that is characteristic of barley teas.

Overall, these are great teas. I’d definitely consider picking one up next time I’m in the grocery aisle as a healthy option for a warm day.